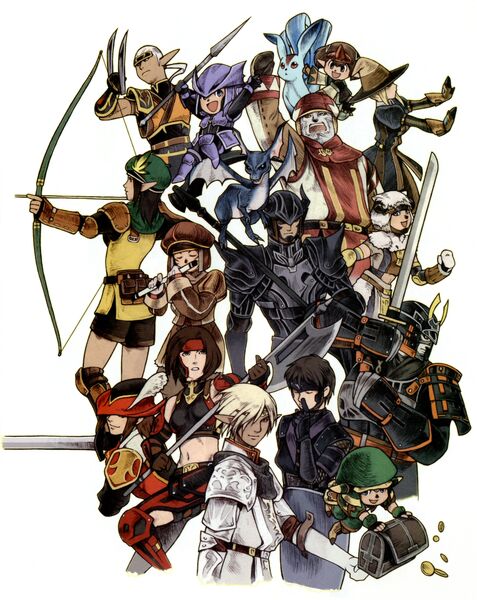 Era is a free non-profit Final Fantasy XI private server gaming community, specifically focused on the classic 75 cap experience up to Wings of the Goddess expansion with many custom features and content that is always growing.

Server Rules - It might be best to read these before playing.

What Makes Era Unique - A rough guideline of major differences one would find on Era.

What Addons & Plugins Are Allowed - This page is fairly self-explanatory.

Era has a large amount of custom content, most likely dwarfing any other private FFXI server in scope! You can see a listing of all of the custom content here.

Known Issues - A listing of known issues players might come across.

Q: How many people play on Era? Will I be able to find/make experience points parties and participate in classic FF endgame?

A: As of the time of this writing, one would generally find over 100 characters online even at non-peak times. Equipping the Teh Social linkpearl all new characters start with, one can easily see there's always people on looking to do stuff and shoot the shit. Being a smaller community, most people care about their reputation and don't act like complete jackasses, which is nice.

Since Level Sync is active on the server and unrestricted, one can typically find or make an experience points party without an issue around the clock. Players can always elect to create alt characters and utilize them to fill in the gaps or powerlevel their parties if they'd like to do so.

Linkshells do classic FFXI events like Dynamis, Sky, Sea, HNMs, and more on Era. It is up to you to attain access to these areas and network with fellow players in order to do them.

Q: What expansions are playable on Era?

A: One can play jobs, access areas and do events from vanilla FFXI, Rise of the Zilart, Chains of Promathia, Treasures of Aht Urghan, and Wings of the Goddess.

Q: What sort of quality of life improvements will I find on Era?

A: Era features a 4x EXP gain rate, unrestricted level sync, Fields of Valor is available, increased movement speed, boosted gil rewards from many quests, the ability to teleport between unlocked Home Point crystals, and all outpost warps and maps are unlocked from the start.

In addition, players start with tons of inventory space. A full 80-slot inventory, 2 Mog Safes, Mog Satchel, Mog Sack, Mog Case, and all 4 Wardrobes. You do still have to unlock your Mog Locker and obtain furniture to increase the Storage inventory of your Mog House.

FFXI veterans who might be wary of having to do some of the old footwork yet again to play on Era should be at ease. Era's balance of retaining the rewarding gameplay with QoL improvements is just right for individuals who might have more responsibilities than they did in when they first started playing the game.

Retrieved from "https://ffera.fandom.com/wiki/Ffera_Wiki?oldid=1130"
Community content is available under CC-BY-SA unless otherwise noted.